BetRivers has a lot of other basketball betting options, too. You can bet on WNBA, NBL (Australian league), LNB PRO A (France), NBA Series Markets, and more!

The 82-game NBA season is particularly popular with sports bettors in Illinois. Perhaps that’s not surprising – after all, Chicago is home to one of the most incredible dynasties in all of sports history, the Chicago Bulls led by Michael Jordan and Scottie Pippen.

Keep reading to learn more about the NBA and NBA betting at BetRivers Illinois Sportsbook!

The National Basketball Association is one of the world’s most popular professional sports leagues. Spurred on by superstars like Michael Jordan, Larry Bird, LeBron James, Stephen Curry, and many others, the NBA has won over fans by the millions.

Since its inception, the league has witnessed distinct eras featuring dominant dynasties. For example, there was the Minneapolis Lakers dynasty that bagged five titles with the legendary George Mikan at the forefront. Then came the Boston Celtics dynasty that took home eleven titles in thirteen years courtesy of Bill Russell and Red Auerbach. Magic Johnson and Larry Bird took over in the ‘80s. Michael Jordan was the best in the ‘90s and thanks to his six titles is regarded as one of the best pro athletes in the history of not just basketball, but all sports. 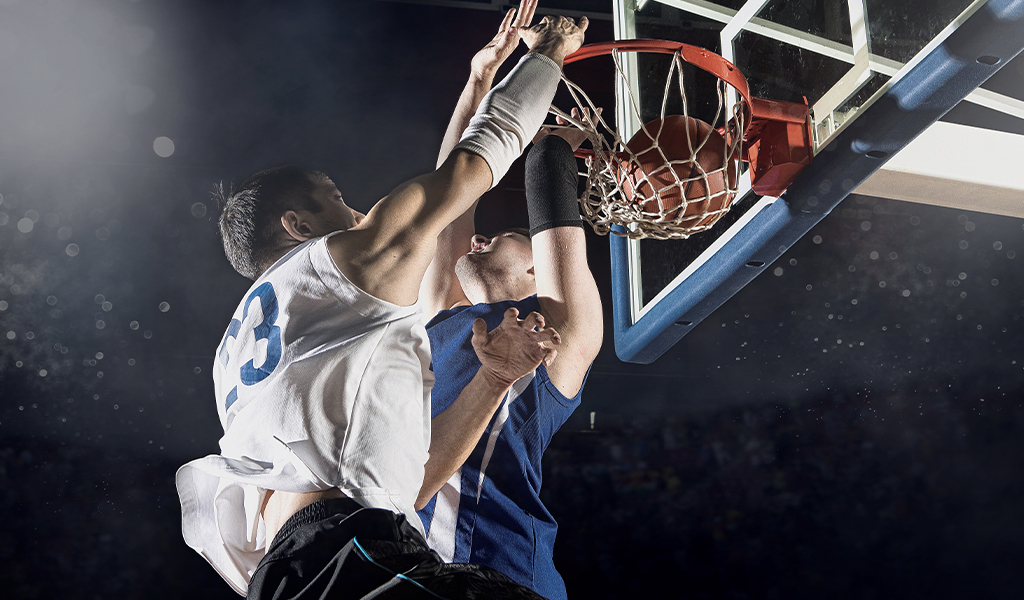 Players from around the globe travel to North America to play for one of the 30 NBA franchises. Each team’s roster has up to 15 players, but only 12 are active to participate in contests. During each game, each team plays five players at a time. The small number of participants means that one superstar can drastically alter the game’s momentum and outcome.

Why does the NBA play 82 games?

The NBA’s 82-game schedule was created for the 1967-68 season after two teams (San Diego Rockets & Seattle SuperSonics) were added to the league, increasing the total number of NBA teams to 12. No one is sure how long the 82-game system will last. The physical rigors of the long season increases injuries to star players in the playoffs, when their skills are most needed.

To increase fan interest, the NBA required franchises to play the teams within their conference at least eight times. They also play teams outside their conference seven times per season. The regular season typically starts in October and runs to April. Then the playoffs begin, and the NBA Finals take place in July.

10 Best NBA Players of All Time

The NBA has a colorful history that goes back seven decades. Through the years, extraordinary players have made names for themselves on and off of the court.

Olajuwon gained a reputation as one of the best big men in NBA history. He was an offensive threat thanks to his trademark "Dream Shake" move.

With his immense height and girth, “Shaq” had his way with opponents in the paint. He led the Los Angeles Lakers to three consecutive NBA Championship titles in the 2000s, and also won three Finals MVPs.

Tim Duncan was instrumental in leading the San Antonio Spurs to four NBA Championships and was later selected to 14 All-NBA Teams.

Chamberlain's is a household name, and his influence has been widely acknowledged. The court bully averaged 50.4 points and 25.7 rebounds during the 1961-62 regular season.

LeBron James has quickly transformed into a great two-way player, scooping a position in the 5 All-Defensive and the 9 All-NBA and Teams. His statistical greatness is undeniable. Yet to many pundits, his inability to match Jordan’s championship game performances means he’ll never be the GOAT.

Bird made 10 All-NBA and three All-Defense Teams in his 13-year career. He is famous for leading the Boston Celtics to three NBA Championships while compiling up to 2 Finals MVPs and three regular-season MVPs in the process. With his ambidextrous passing skills and pinpoint shooting, he was virtually unstoppable in crunch time.

With 38,387 points, Kareem is famous for being the all-time leading scorer in NBA history. He also snagged the most regular-season MVP awards (six), 11 All-Defense selections, 15 All-NBA selections, and 19 All-Star appearances.

Magic Johnson won 1980 Finals MVP as a rookie, when he became instrumental after starting at center in place of the injured Kareem Abdul-Jabbar. Magic amassed 10 All-NBA selections in his 14-year career.

Russell boasts of being the greatest defender in the history of NBA. He led the Boston Celtics to an astonishing record 11 NBA Championships.

Michael Jordan is the game's greatest player. In the NBA Finals, Jordan went a perfect six-for-six, and collected the Finals MVP in all six appearances. His performances under extreme pressure and single-minded focus make him the greatest of all time.

The Chicago Bulls star routinely took control on both sides of the ball. In doing so he bagged 11 All-NBA selections, 10 scoring titles, and nine All-Defensive First team selections.

The major difference between NBA and other sport is the pace of the game and incredible amount of scoring. From a gambling perspective, that equals many betting opportunities.

How Does NBA Betting Work? NBA betting lines can be confusing to understand. We’ve included some basic basketball betting tips here to help you make sense of the odds and find the betting strategies that suit your style. As in sports like football, you can bet against a point spread, which is fairly simple. Or you can try more complicated bets like teasers and parlays. No matter which bets you choose, you’ll benefit from using a trustworthy sportsbook like BetRivers. Deposits and withdrawals are easy, and you’ll have access to 24/7 customer service reps who will address all of your concerns and questions.

What are NBA Point Spread Bets? Betting against the spread is one of the most popular wagers. In this case, you don’t pick an outright winner or loser. So, if you place a spread bet on the favorite, they must win the matchup by a certain number of points. On the other hand, if you bet the underdog, you hope that they either win or lose by fewer points than the designated point spread.

How do you Bet on NBA Totals? To bet on NBA totals, you will have to predict the combined total of points scored by both teams during the game. This is one way to wager on the game without having to pick an outright winner.

What is NBA Moneyline Betting? Many bettors bet the NBA moneyline. When you bet the moneyline, you’re betting on who will win the game. The margin of victory does not matter –the point spread has no bearing on whether you win your wager. 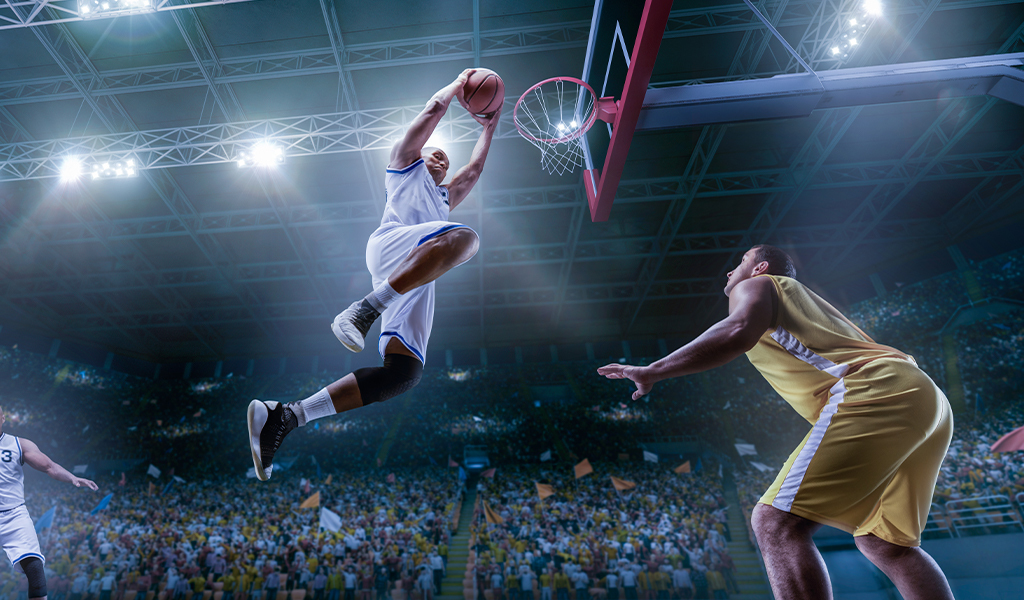 Can you Bet Live on NBA Games? BetrRivers provides live odds while the NBA game is ongoing. That means you can bet on every trip down the court. Once you spot NBA live odds that seem promising, don’t waste time as they will disappear fast. The faster you can make your picks on live NBA lines, the better your potential payout.

What are NBA Prop Bets? In NBA betting, prop bets are increasingly popular. These wagers are based on the occurrence (or non-occurrence) of specific events that may not directly relate to the final outcome of the game. Will LeBron James make his next free throw? Who will make the next three-pointer? Props are high-speed fun for quick-witted bettors.

What are the NBA Futures Betting? NBA Futures bets are a type of proposition bets that are placed on the team that will win what conference or the NBA championship.

Futures are not limited to teams. For example, you can bet on who you think will win league MVP.

If you’re a smart bettor, you’ll keep in mind that only 8 different teams have managed to win the NBA championship in the last 30 years. So, picking a favorite is fairly easy. Choosing a dark horse, however, can result in much higher odds that mean a bigger payout at the end of the season. 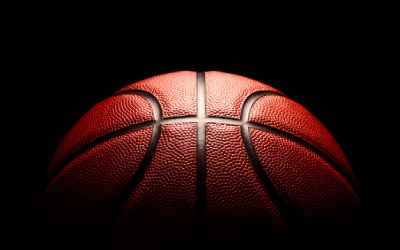